When Volunteering is Too Easy: Better Ways to Engage and Activate Employee Volunteers

You know who you are. You got into this job for one of three reasons:

So, which one are you?

Even if you got your job for a different reason, we can safely assume you’re staying in the role because you want to make a difference. And if you’ve been in it for 6 months or more, you’ve realized that making a difference is not easy. Sometimes it feels like what you’re doing matters, but most of the time you’re trying to improve, trying to get more budget, trying to stay motivated by holding on hard to anecdotal stories of impact. So why – in a world where impact is really all we want – do numbers (namely, participation numbers) seem to be the only thing that matters?

I’ll tell you why.

Numbers get noticed. Across society and throughout history, humanity has learned to look up when crowds gather. We ask, “What’s going on over there? Why is everyone walking that way? What should I know that they know?” We ask these questions because they are the source of our survival as a species. And while we know there can be folly in following the crowd (Whose parent did not instill this warning by asking, “If Carrie jumped off a cliff, would you jump off a cliff, too?” My answer was always yes. I was a delightful teenager.), there is also wisdom in the crowd. Those who stray from groups or dismiss the signals of the stampede may find they are in the path of danger or too isolated to survive. Numbers matter because people notice.

In companies, the people for whom crowds matter most are the people who control the budgets. They, like humanity in its quest for survival, have learned that crowds are a data source. Crowds answer the basic questions essential to a thriving business: What do employees want? What do customers value? What motivates behavior change? The answers to these questions drive strategies, influence campaigns, determine budgets, and motivate promotions. In a sense, crowds control the business. With the stakes this high, no wonder numbers – namely, employee volunteer participation numbers – are king. When the numbers are low, your programs go unnoticed, your budgets remain tight, and the impact you dream of goes unachieved.

Why is it so hard to achieve high participation numbers?

This year more than most, everyone is terrified to ask their employees to do anything beyond the basics of their jobs. They’re busy, they’re exhausted, they just can’t. “We shouldn’t ask our employees to do more right now. They just don’t have time.” The solution? Just make it easier. Curate the volunteer opportunities, plan the events, send out the awards – and then all employees will have to do is show up, make a difference, feel good, and get back to work. It’s the only way to meet them where they are without canceling volunteering altogether. Right?

Wrong. You’re making it too easy.

Human beings make decisions based on a complicated combination of unconscious influences. Making something easy – or removing barriers to entry – is certainly a factor, but sometimes it’s a factor that makes an offer less attractive – not more – and ultimately causes people to lose interest. So, what does that mean for volunteering and citizenship engagement? 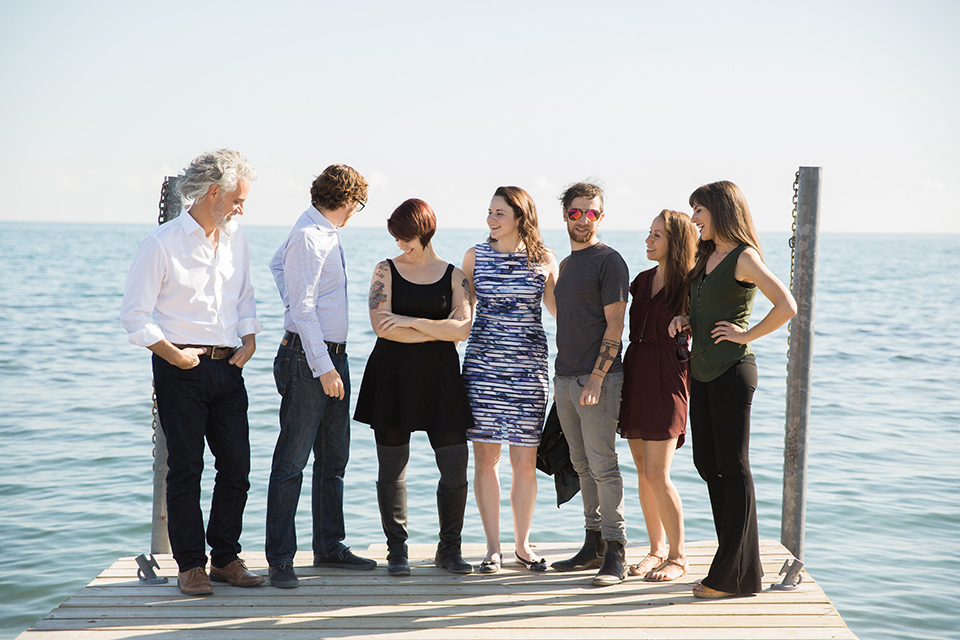 The Story of Realized Worth, 10 Years in the Making

How do employees make decisions?

If you want crowds to flock to your programs and you want to get noticed, shape your messaging, guidelines, and processes around what really works. Among the myriad influences that drive people to make decisions, there are three that are immediately applicable to volunteering and citizenship programs:

1. “I participate because others like me are doing it.”

Last week, I was standing at the 29th floor window of my apartment building. Off in the distance, a plume of smoke rose from the highway bridge that crosses over the Patapsco River. I watched for awhile and made out the shape of a semi-truck and a long line of cars forming behind the truck. I also noticed there was no sign of emergency lights or vehicles anywhere in the vicinity. I stood there, watching, and then went about my business.

About an hour later, as I passed the window, I paused to look toward the bridge again and saw the plume of smoke had spread across the horizon, multiple emergency vehicles had gathered, and the line of cars extended past the end of the bridge, hundreds of cars long. And that’s when – finally – I was struck by a horrifying thought. Had I been a victim of the bystander effect? Should I have called 911 when, from my vantage point 29 floors high, I saw an accident that had recently occurred? Like so many others have done, I assumed the drivers in the cars on the highway would have made the emergency call – and of course, they may have assumed the very same thing. As the well-documented phenomena states, the greater the number of bystanders, the less likely it is for any one of them to provide help to a person or situation in distress.

The bystander effect is an example of “social proof” which is an enormously influential factor in decision-making. While sometimes social proof leads us to choose not to take any action at all (e.g. when we assume others have taken on a responsibility that only one person needs to take, like calling 911), other times it is one of the only influences strong enough to drive action.

An extensive research study conducted in the 1960s showed that human beings, at a very basic level, are imitators by nature. And the more we perceive someone else as similar to ourselves, the more likely we are to imitate their behavior. For example, one group the study focused on was young children who are terrified of dogs. The children simply watched a video for 20 minutes a day of other children like themselves playing happily with dogs. The videos had such a significant effect on the children that, after only four days, 67% of them were willing to enter a confined space with a dog and play happily there without anyone else present. Over time, the effects of the study remained. In fact, the children became increasingly comfortable with dogs as time passed. Versions of this study have been repeated in various settings, further proving the point that simply observing the behaviors of others influences our own – and the more like us we perceive the others to be, the more likely we are to adopt their behavior.

First, how do we avoid the bystander effect? If employees perceive a need to “help”, they’re more likely to assume that a sufficient number of people have responded to the need to help with volunteer events or social impact initiatives, they’re likely to dismiss the invitation outright. There are two ways you can avoid this reaction:

2. “I participate because it reinforces my identity.”

In 1980, deep in the Iowa winter, a group of residents were asked to try to conserve energy and save fuel. They were all living in homes heated by natural gas and the request included a selection of energy-saving tips. They all agreed to try to practice conserving fuel, but at the end of the month, no real energy savings had occurred. Good intentions weren’t good enough to result in follow-through. So, the researchers tried a new tactic. With a similar set of residents, they made the same energy-saving request, but this time they offered to publish the names of those who saved fuel in the local newspaper as, “public-spirited, fuel-conserving citizens”. This time, the energy savings were significant! Simply the promise of recognition had motivated the residents to follow through on their good intentions.

But then the researchers tried one more thing.

Similar residents, same request, same promise of recognition. But this time, halfway through the experiment, they called up the residents and said they would, in fact, not be able to publish their names after all. The researchers expected that any initial energy savings would immediately drop off once the promise of recognition was removed. In reality, the opposite happened! They actually conserved more fuel in the second half of the experiment than the first! It turns out it wasn’t recognition that motivated the residents; rather, they were motivated by the opportunity to be identified as public-spirited citizens. Once making a commitment to that identity and acting on it based on an external reward, removing the reward actually reinforced their belief in their new identity. It became important to demonstrate that the new identity was real by following through on the commitment, with or without a reward.

For volunteering and citizenship programs, it’s important to understand that rewards and recognition are important, but they don’t necessary incentivize ongoing participation. The more effective way to achieve ongoing participation is to incorporate practices that spotlight involvement as an employee expression of identity. “I participate in this program because it’s who I am.”

Remember, this phenomena of “reinforcing my identity” only works when it’s not coerced! Always allow volunteers and Volunteer Leaders to opt out, opt in, and own the experience for themselves.

3. “I participate to justify my initial investment.”

My little brother used to be in the Marines and his career has since progressed into other facets of law enforcement. Since beginning a career trajectory toward law enforcement, he has never wavered from the belief that his experiences in training intensives, boot camp and higher levels of conditioning continually act as something of a crucible for him that make him a stronger, more resilient, braver and better human being. His career path has been incredibly challenging, but he is absolutely clear on the value those choices have contributed to his life – and everyone in our family would agree with him.

“People who go through a great deal of trouble to attain something value it more highly than those who obtain the same thing with minimal effort.” The truth of this basic human tendency is demonstrated in myriad ways across society, throughout history, and universally. Often, the groups and ideals that are the most difficult to belong to become the ones that people irrationally adhere themselves to, such as fraternities with dangerous hazing practices, cults with strange and sometimes abusive or life-threatening requirements, and initiation ceremonies still practiced by some tribal cultures. While I would not necessarily condone these practices, they are helpful in demonstrating how deeply innate our tendency is to place greater value on anything that requires hard work. We’re also far more willing to advocate for others to put in the same effort we did.

Create meaningful barriers to entry by requiring employees to complete an application process to become part of the program. If just anyone can join without any extra effort, it’s clear that the program has nothing to do with me as an individual. My commitment is not necessary for success. Programs that require training prior to participating see significantly higher activation and commitment levels.

Realized Worth designs and implements corporate volunteering programs. We go beyond traditional volunteering by incorporating acts of kindness, civic engagement, skills-based opportunities and more – and we take into account the basics of human psychology in our approaches to change management, employee motivation, and ongoing activation. As much as we like to think we know a lot about these concepts, we didn’t come up with the ideas in this blog on our own! For more research and additional ideas, please check out Robert B. Cialdini’s book, Influence: The Psychology of Persuasion. Will you let us know what you learn? Talk to us today to learn more!